Here's one article of historic evidence I've uncovered in the pursuit of Hutton genealogy--the will of Thomas S. Hutton of New York, residing in Kanawha county, WV, at the time of his death. Now I've just to discover his relationship to my great-great-great grandfather Joseph Hutton. Just think, my ancestors were bequeathed 17,000 acres in West Virginia (Putnam County)--wonder what happened to all of it.

by Marshall Roth
The secret of why Al Qaeda called off a plot to gas the New York City subways.

I’ve decided it is definitely time to simplify my life. At my age (undisclosed), if I haven’t used it in 10 years, I probably will never use it again. Therefore, I am downsizing my cabinet supplies to make things easier to find, clean, store, and use. It is simply not necessary to keep 3 cans of half-used bathroom spray when I haven’t used it in 10 years (or more). I do, however, have an extra cabinet in the garage where I may store things I rarely use just in case I decide later that I do need them. After all, we live 30 minutes from the nearest town, and sometimes needs arise.

All my life, I have hoarded things, not willing to give them up if they still have a useful life. Now, however, I find the desire to hoard abating. In its place is a desire to live simply, peacefully, on less, doing less, having less, saving less—a restful feeling. I hope it stays.
Posted by Jill at 1:19 PM 1 comment: 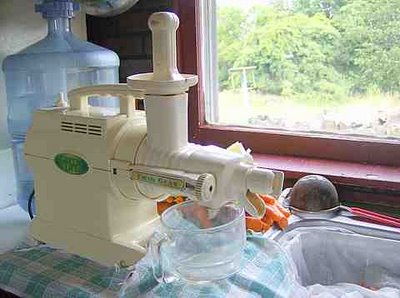 Free online juicing demonstration:
Here we are ready to juice. 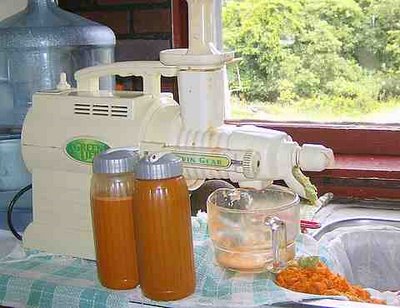 Here we are finished juicing--mess and all.

Actually, this is just my juice--Virgil likes his with beet, spinach, chard, and kale. Mine just has carrot and celery. 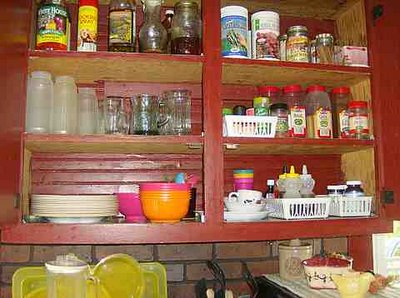 Here's what I've been working on-organizing my cabinets. I haven't had this kind of time in 20 years.
Posted by Jill at 1:47 AM No comments: 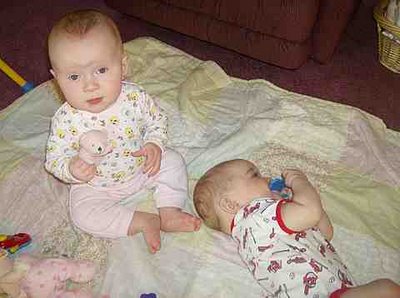 Baby pictures are always welcome here. Great-niece and great-nephew Sarah and Brandon.
Posted by Jill at 1:43 AM No comments: 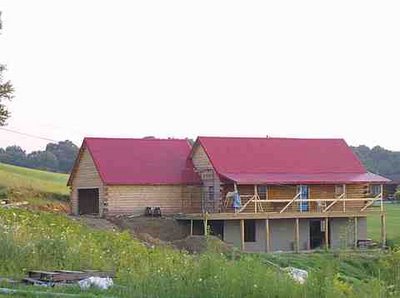 Here's the log cabin Virgil's helping to build for his sister, Patty.
Posted by Jill at 1:41 AM No comments:

Here's the unpretentious home and garage of the mechanic who's working on our motor home. No worries about locking up at night. 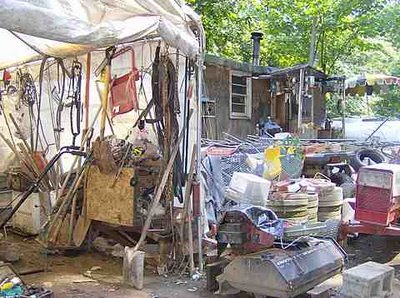 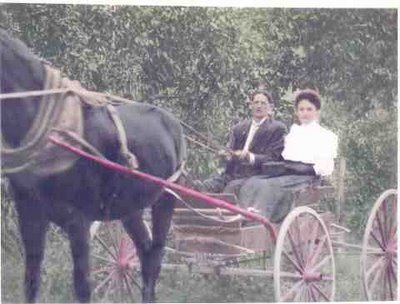 The picture with the story below reminds me of this picture of my great-grandfather Robert Emory Hutton and his bride-to-be Anna Laurie Carpenter Hutton in their courting days. They kept the horse, Old John, until he died. (Rev. 7-28-06)
Just think, what if someone tried to take their land like the Nazi's did the Jew's land--or the people who are still trying to wipe the nation of Israel off the planet. We've been blessed in America. We need to support God's chosen people.
Posted by Jill at 1:34 PM No comments: 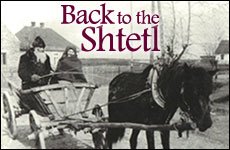 Here's the picture that goes with the story.
Posted by Jill at 1:29 PM No comments:

Roots the Nazis tried to Destroy


by Rabbi Ephraim Shore
A pilgrimage to discover my family's roots that the Nazis tried to destroy. 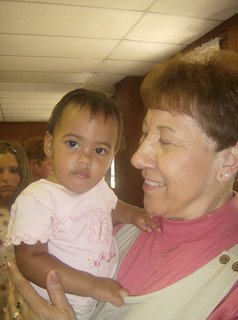 Here's one of the youngsters who attends our church occasionally, with her grandmother Kay, who attends regularly. Isn't she just a doll-baby?
Posted by Jill at 11:47 AM No comments:

Here are some pictures of the ladies in our church from Homecoming 2006. Maxine used to preach, I believe. She still gives a rousing testimony, standing on one wooden leg. 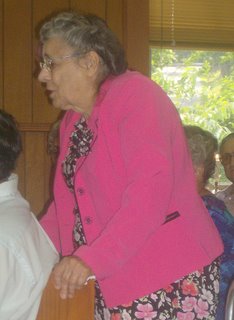 This is Ruth. She sings loud, and often leads congregational numbers. Pastor Troy is helping her on the guitar. 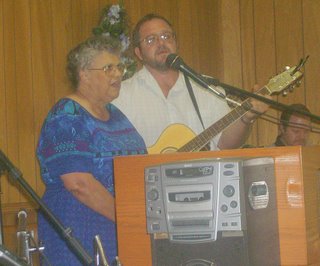 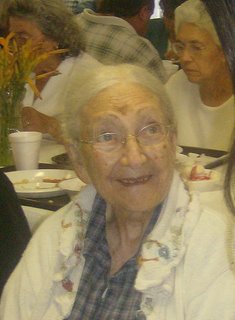 I thought I would post some pictures of some of the senior ladies in our church. They are such interesting people. I hope they don't mind.

This is Eleanor. She is the oldest, I believe. 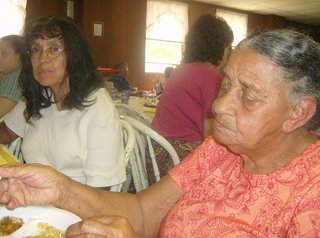 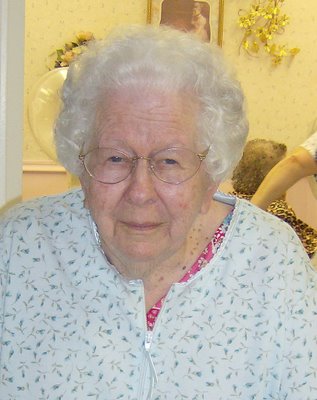 Mommo gets her hair done. 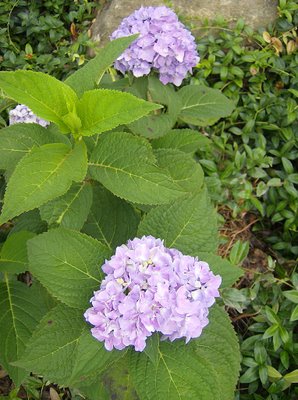 Here's the beautiful hydrangea Amber got me. I love purple.
Posted by Jill at 8:29 AM No comments: 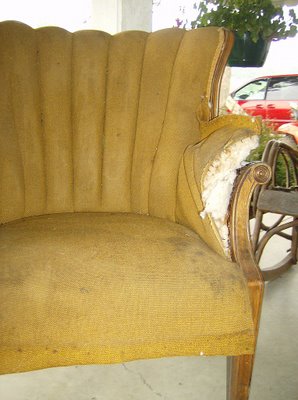 Here's the chair I'm trying to reupholster for a lady. I'm taking my time on this project.
Posted by Jill at 7:37 AM No comments: 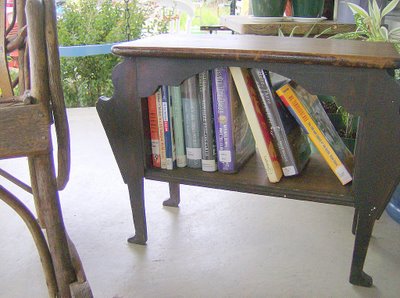 Did I mention I got a new camera for my birthday? I also got some gadgets to go with it--cordless mouse, USB port, memory card, print shop, rechargeable batteries, photo paper, ink--I could go on. Anyway, I am determined to post more and better pictures.

This is the table my uncle Bob made in shop in high school--my dad made one something like it, but it has been destroyed.
Posted by Jill at 7:14 AM No comments: 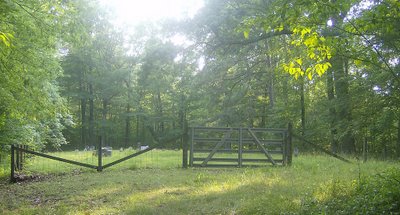 This is the Casto-Hutton cemetery, resting place of Oliver and Julia Ann Hutton.
Posted by Jill at 8:00 AM No comments: 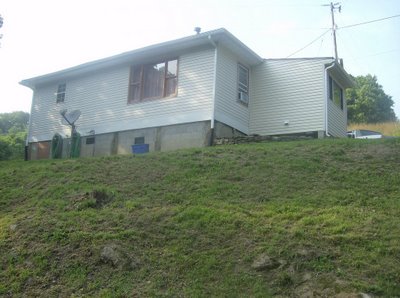 Here's a picture of the restored home of Marcellus "Cell" Carpenter, father of my grandmother and her eight brothers and sisters.
Posted by Jill at 7:35 AM No comments:

I visited the old Hutton homeplace last weekend and reaped lots of pictures. This is my Granny Hutton's old cellar. 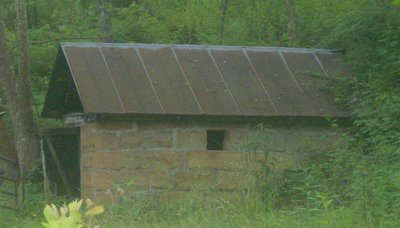