Check out this testimony in this week's Health Tip:

"Hello, George and Rhonda, We came to Health Minister
training, there at Hallelujah Acres in March 2005. What a
great time we had! At that time I had been on The
Hallelujah Diet for only 3 months. If you remember, I had
been diagnosed with bone cancer, lung cancer, and breast
cancer in December 2004, and when I had last seen my
oncologist in December 2004, I was offered no hope of
surviving my cancers. Then Carolyn Moore, a Health Minister
with Hallelujah Acres (In Orlando, Florida), showed me The
Hallelujah Diet, and I went on it the very next day. I
believe God gave me this diet to offer me hope, and that He
was going to heal me through this diet. Don't we have an
awesome God! He gives you what you need at the right time.
Well, after I had been on The Hallelujah Diet for 6 months,
I went back for a cat scan of my lungs, which revealed that
the tumors on my left side were gone, and the ones on my
right side had gotten smaller. I can still feel the lump in
my breast, but it has gotten smaller! Praise the Lord! The
lung doctor, after seeing the scan, thought I was on some
type of medication, and was so surprised when I told him I
was on a diet and believed God was going to heal me through
the diet. He just had a big smile. Wish you could have seen
the look on his face as he looked at the scans. He asked me
several times to write down exactly what I was doing. He
wanted to know! I go in November for a full body scan and
that should tell me about the cancer that was in my bones.
Then I will also make a visit to the breast surgeon. I
haven't been back to see her since I was diagnosed, and she
is a little upset with me, but maybe she will be happy when
she sees nothing on the sonogram. My husband Glenn is doing
great also! We really appreciate all that you and your
staff have done to tell people about the Hallelujah Diet.
It has been a blessing to know that someone cares enough to
tell others so they can also become well. I also appreciate
that you share God's plan of salvation, because accepting
Christ, as our Savior is the single most important thing we
can do in this life. Thank you both so much and for the
sacrifice it takes to do all the work that you do. We
appreciate you!"
Posted by Jill at 9:45 PM 1 comment:

This testimony was in this week's Hallelujah Health Tip:

"I was away the entire month of August taking care of my
sister who had cancer. The results were fantastic! When I
arrived, she was very, very sick. She had been told on June
28 that she had STAGE-4 BREAST CANCER, and for the entire
month of July had been in and out of the hospital - more in
than out. The cancer was spreading very rapidly and she was
in a lot of pain. They had already drained 2 gallons of
fluid from her stomach twice. The cancer had started in her
breast and had spread to her stomach and bones. She was on
a puffer for a bad cough, caused by the fluid build up. The
doctors had placed her on medication for the cancer in her
bones, and had given her one bout of chemo. For the entire
month of July, she had not been able to eat or drink hardly
anything, had lost 30 pounds, and was having a terrible
time keeping anything down. When I arrived, I started her
immediately on BarleyMax the first day. On the second day
it was BarleyMax, and I added probiotics and enzymes. On
the evening of the second day we got a juicer that our
other sister had. On the third day she received BarleyMax,
probiotics, enzymes, and carrot juice, along with a little
raw food in the evening, which she was able to keep down.
By day 4, she felt so much better that she couldn't wait
for her lunch. On day 5 she went to church, and was well
enough on the 6th day that we were able to go to a hot
springs resort for the day. On about the 5th day, I
started her on Fiber Cleanse along with BeetMax;, as well
as the B-12. Her results were nothing short of miraculous!
By the time I came home (after only one month), she was out
shopping, helping to make dinner and juice, and told me she
did not feel like she had cancer anymore. She had had her
stomach pumped out 3 days before I arrived for the second
time, but this was not necessary again after I started her
on The Hallelujah Diet, along with those supplements. Her
cough went away in 3 days, and the pain from the cancer in
her ribs went away after a week. It was at this point that
she decided on her own to not go for any more chemo and to
also stop all her medications. God is so good! I signed her
up for a seminar that a health minister is doing at Eagle
Rock Ranch on September 17, for the whole day. Health
Minister Jerrod Sessler (who saw his Stage 4 Melanoma
Cancer go away after adopting The Hallelujah Diet & was
featured in Back to the Garden #26), will be there to
speak, and my sister will have opportunity to talk to him.
I had to let you know the results of my trip - it was so
successful with God's help."
Posted by Jill at 6:45 AM No comments: 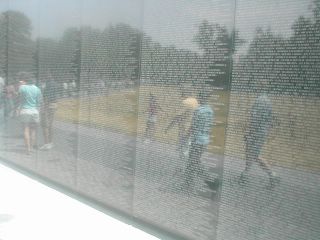 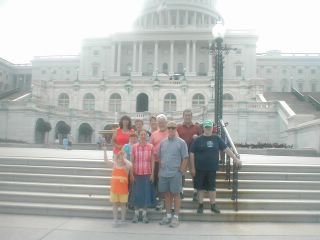 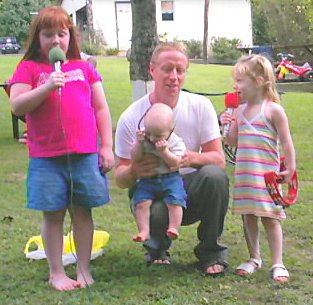 Sarah and Kylie sing while Virgil and Luke watch 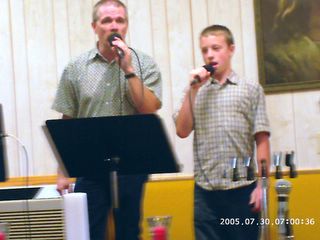