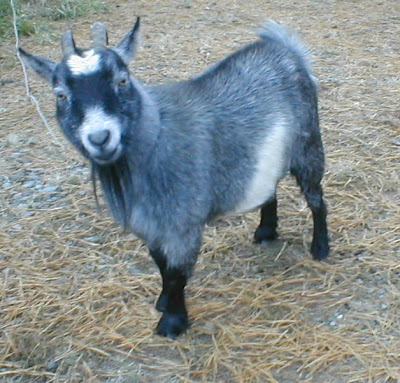 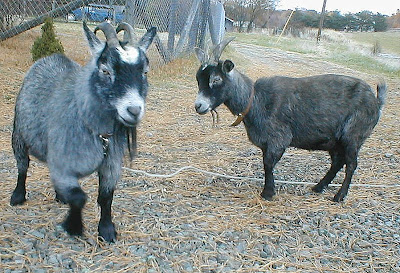 I have not posted in a while because I had no pictures to post. I have had 4 cameras stolen in two months. Pray that I can catch the culprit and reclaim my cameras and photos. Plus, my internet service is long distance now, so I refrain from long hours on the internet.
Here are a couple of photos of my pygmy goats taken with my old Olympus digital. Muffin didn't cooperate, but Izzy was showing off. 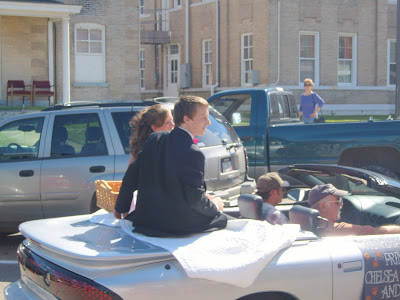 I know I've been seriously neglecting my blogging duties lately. I was very busy starting up the afterschool program. Also, I was robbed a couple of times (including my cameras). I hope to keep updated from now on. This is a picture of Josiah and his girlfriend in the homecoming parade. Chelsea is the Freshman Princess and Josiah is her escort.
Posted by Jill at 6:17 AM No comments: 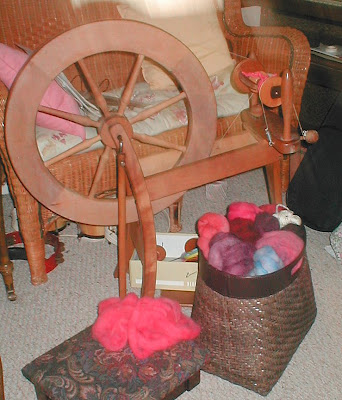 Here's the spinning wheel my cousin Jan brought me from Oklahoma. She also brought me the basket full of wool to spin. I'm so excited to be actually spinning on my own wheel! Guess who decided he just had to try it, too? 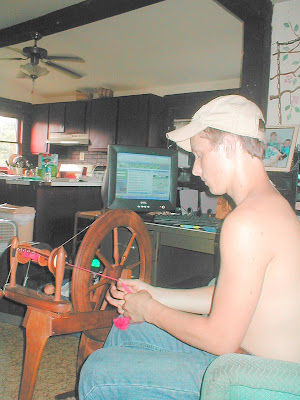 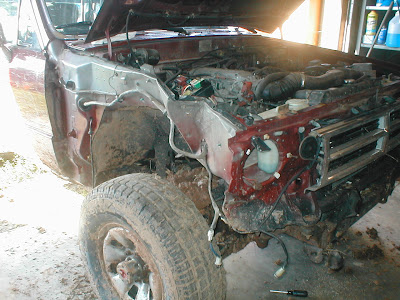 Here's a couple of pictures of the state of my truck. I wish I had a picture of how cute it looked before the wreck with it's flat bed and wooden racks. Josiah and his friend just had to take it in the woods for a spin, and it slid into a tree. Here it is after a quick fix. Later pictures will appear after all the new parts and body work are complete. 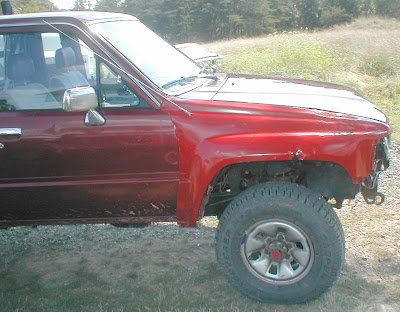 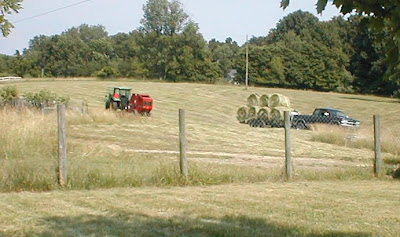 Sorry I haven't posted in forever. I got kind of busy with the grandkids and Josiah and the post office job. Here's one of the church guys and his nephew putting up hay on my place.

I've been tagged for a meme (whatever that it is) by Jan at The Work of Her Hands. Here goes:

I worked at Public Debt right out of high school. Then I got on at DuPont, but I quit to
stay home with my first child. I volunteered at the Christian School for 15 years for free tuition, with a break when my second child was born. When my husband lost his
job, I went back to work. I now work as a Youth Activities Director and Afterschool
Director at a local church. I just got on at the Post Office a few months ago.

4 Films I can watch again and again:

I was brought home to a little beginner home in Vienna, WV
I spent the rest of my childhood in a home my dad built on a farm in Murraysville, WV
My husband owned a home in Davisville, WV, when I met him.
We moved to a farm in Cutler, OH, to raise our kids in the country.

4 places I have been on Holiday:

Niagra Falls (3 times including my honeymoon)
Florida (2 times, once in a moving van, the trip was paid for by the mover)
Texas (again in a moving van, our daughter's furniture)
Libraries and Cemeteries (my favorite off-line places for genealogy research)

4 Things I Do everytime I get on the net:

4 things I would not eat for anything in the world

Bugs of any kind
Pets (We went to a friend's house one time and they cooked her pet rabbit for dinner. Waaaah!)
Road Kill (even though some of it looks really fresh)
Leftovers found in my grandson's car seat (He stores food there for convenience later)

4 places I would love to be right now:

Jan said, "Talking and visiting with Grandma." (Did that Thursday)
Jan said, "Sitting on my mom’s porch in the early morning, chatting and drinking
coffee, enjoying the peace that I feel when I’m there." ( Me too, except I would be
eating watermelon. )
Jan said, "Sitting beside Jody and comparing the verses Grandma had underlined in
my Bible with the verses she had underlined in Jody’s Bible." (I love to spend time
with my brother, Eric, working on computers or playing music. )
Jan said, "Singing with Steven, amazed at how beautiful his voice is." (I love to sing
and play music with my kids and grandkids.)

If you've been tagged, answer the questions on your blog and tag four more people. 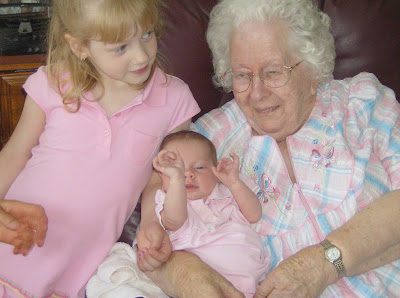 Luke wouldn't pose for the picture, so we just took one of the girls with Mommo. 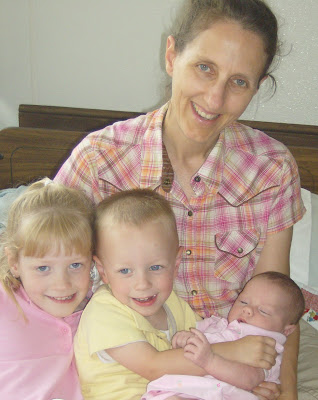 Granny Jill with grandchildren on a visit to Mommo.
Posted by Jill at 8:57 AM No comments:

A Day at the Park 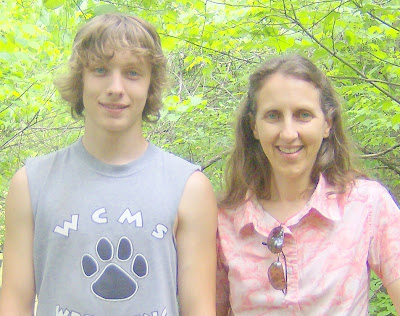 I took the youth group to the park, and guess who showed up! My long lost son whom I hadn't seen for four months! It was so good to see him again. We had lots of catching up to do. He sure is getting tall, isn't he? 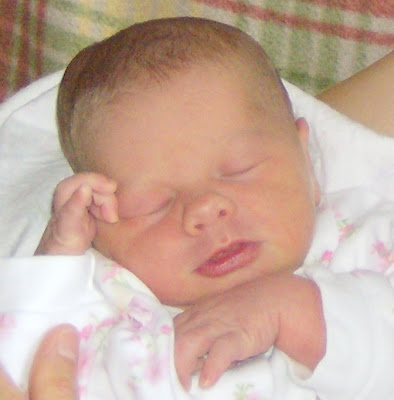 I was presented with the best gift a mother can receive on Mother's Day--a new grandbaby!
Natalie Faith was born on Friday, May 11, weighed 7 lbs., 14 oz., and was welcomed home by her little brother and sister, Luke and Kylie. Mom and Dad are doing fine, too. 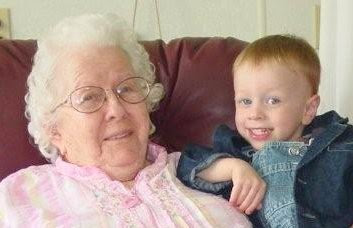 We took Luke to visit Mommo this week. He was a real hit at the "nursery" home, as Kylie calls it.

Kylie wrote a book about her baby Easter bunny, Snuffy. Maybe she will be a famous author someday.

Here's the pickings of our recent baby-goods shopping trip. 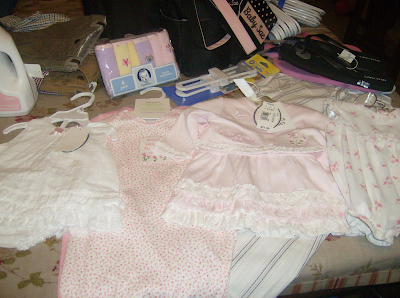 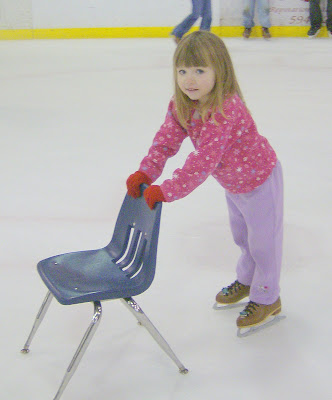 I thought you might like to see this picture of Ashley after she got brave on the ice.
Posted by Jill at 9:42 AM No comments:

Here I am trying to coax Ashley from her safe chair onto the ice. The youth group had lots of fun, and I actually learned how to ice skate without falling once! 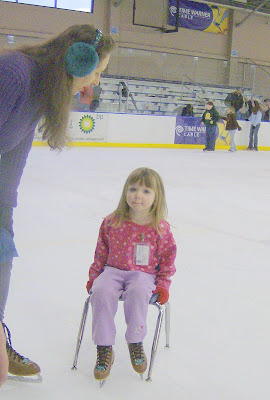 This is to inform you that the little package Amber has been carrying every day on her postal route is discovered to be---a girl! There will be much shopping for all pink, ruffly, lacey, and fluffy things. And maybe more packages containing those items will have to be carried.
Posted by Jill at 8:09 AM 1 comment:

Luke shows off in his new cowboy hat. 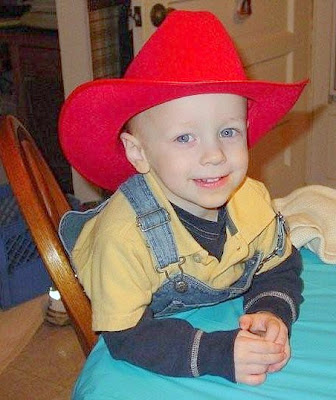 If you can guess what this is, you have won the grand prize! 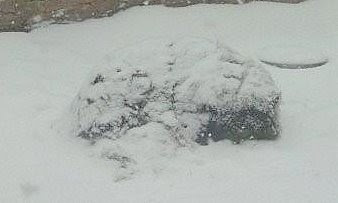 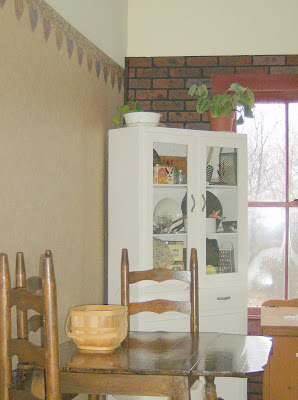 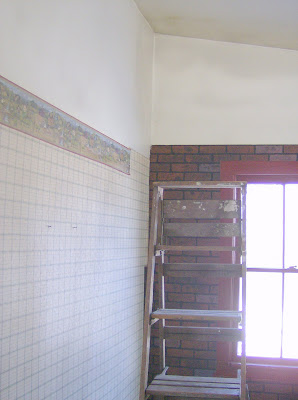 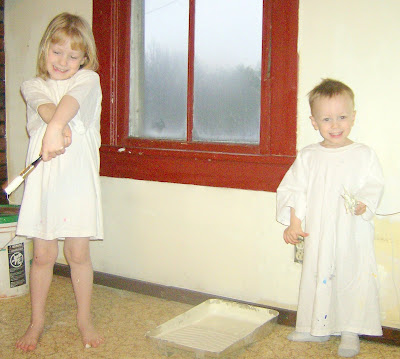 Here's my two painters at work. 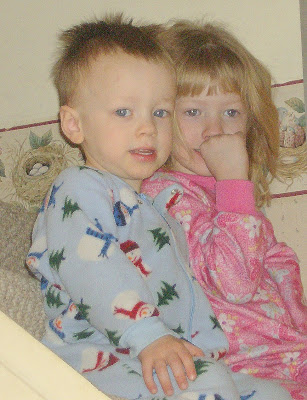 I have two helpers this week. Here they are all bright-eyed and bushy-tailed.

I took the youth group rollerskating. Kylie was with me, and Josi showed up. It was lots of fun, and I didn't even fall down once! Here we are eating pizza. 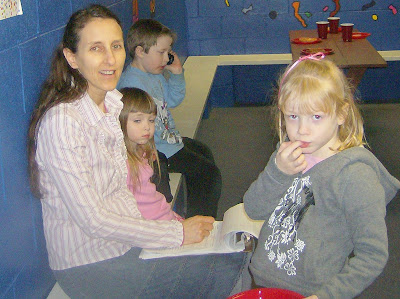 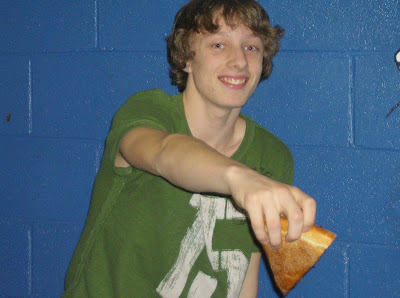 Here's a really neat illusion to try. The faces switch places when you step back from the screen 12 feet. How do they do that? It even works when you print it out on paper. Amazing! 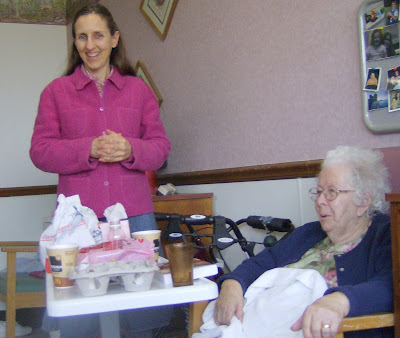 Kylie visited with me this week. We went to visit Mommo at the "nursery" home, as Kylie calls it. She always has such an interesting twist to her words: "cauliflower" for flour, "presidents" for presents.
Posted by Jill at 9:10 AM No comments: 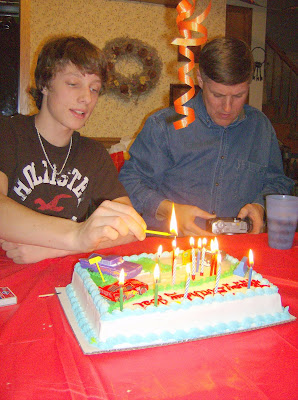 Here's the two favorite men in my life right now. Josi, celebrating his 14th birthday, and my brother Eric, who also just had a birthday. 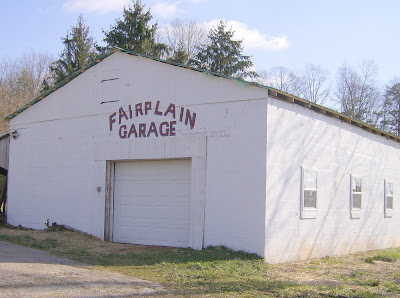 Here's the newly refurbished Fairplain Garage, built by my Grandad Anderson in order to support his large family.
Posted by Jill at 6:40 AM No comments:

Not just another Holocaust story, from Aish.com:


Leah Kaufman's story of unfathomable horror and courage remained locked in memory's vault for half a century, until her granddaughter started asking her questions.

So sorry I haven't posted for awhile.
I need to share with you the fact that my husband and son never came back from their stay with his sister. The "working out of town" became the "husband left and took son with him."
I'm torn between wanting to preserve my marriage and feeling the need to protect myself from further assaults of being abandoned (this is the third time he's left me).
You're prayers are much desired.
Posted by Jill at 9:47 AM 1 comment: