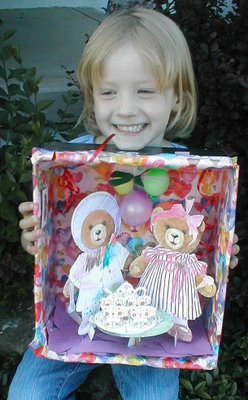 Kylie and I spent a whole afternoon on these paper bears and their party box, complete with a working ceiling fan, balloons and streamers.
Posted by Jill at 7:12 PM No comments:

The Council for West Virginia Archaeology reproduces these original ogham (ogam) petroglyph articles for the record only. We do not give credence to their conclusions.For articles discussing these claims, see the listing at the end of this page.
Part 2
LIGHT DAWNS ON WEST VIRGINIA HISTORY By Ida Jane Gallagher
© 1983 WV Division of Natural Resources, used with permissionOn an eventful November day in 1982, Robert Pyle, Tony Shields, Arnout Hyde Jr. and Ida Jane Gallagher visited the Wyoming County Petroglyph. They were joined by pilot Edward Helm, who assists Hyde with aerial photography; student pilot Claudia Kingsbury; and Gallagher's father, H. P. "Friday" Meadows, who provided four-wheel drive transportation.The group scrambled up a steep bank to the rock ledge. A blaze of autumn leaves almost concealed the narrow shelter which lies recessed beneath a cliff overhang. Gallagher's first look at the stunning ten-foot-long petroglyph assured her that it was of major historic value.

Horse Creek Petroglyph in Boone County before it was chalked. Credit: Arnout Hyde, Jr. Shortly after the investigative team visited the Wyoming County Petroglyph, Helm learned of another one in Boone County, from local residents Jerry and Steve Stone. The Stone brothers made arrangements with the land owner for a group of investigators to visit the rock carvings, which are named the Horse Creek Petroglyph.On the drizzly afternoon of December 20, 1982, the Stones met Arnout Hyde Jr., Claudia Kingsbury and Ida Jane Gallagher and led them to the site. The group slid down a muddy creek bank to reach a rocky outcrop that holds a series of petroglyphs. When they peered into a low rock shelter, they saw a lengthy series of markings gouged into the rear wall. Gallagher thought that they were the same Celtic Ogam script that the recording team encountered on the Wyoming County Petroglyph. Crouched under the rock ledge -- which all agreed was a perfect spot for snakes in warmer weather -- they took turns removing silt deposited by creek flooding from the surface of the carvings.As they took photographs, the rain turned to spitting snow. Further removal of debris and silt, which was necessary for making a permanent recording, was abandoned for a better day. Fortunately, they were able to make clear photographs. These were sent to Fell, and he immediately began decipherment of the lengthy inscription. His translation of the Horse Creek Petroglyph further validated the Wyoming County Petroglyph's inscription.Fell called the Horse Creek Petroglyph, "a sensational find." He believes that it may be the world's longest Ogam stone carving. It also contains a second script, a short Libyan addition to the original work. Fell dates the Celtic Ogam from the same period (sixth to eighth century) as the Wyoming Petroglyph. The Horse Creek carvings also translate into the Old Irish language. The complete decipherment is given and explained in Fell's article.The main part of the long inscription of the Horse Creek Petroglyph is written in three horizontal lines. The reading begins with the middle line (see Fell's decipherment) and is translated as follows:Line 1 (middle) "A happy season is Christmas, a time of joy and goodwill to all people.Line 2 (bottom) "A virgin was with child; God ordained her to conceive and be fruitful. Ah, Behold, a miracle!"Line 3 (top) "She gave birth to a son in a cave. The name of the cave was the Cave of Bethlehem. His foster-father gave him the name Jesus, the Christ, Alpha and Omega. Festive season of prayer."The far left portion of the inscription surrounding the hand translates: "The right hand of God is a shield. -- a prayer."Beneath it on the left is the short Libyan script that says: "The right hand of God."To the left of this inscription is another petroglyph that bears a partially encircled hand. It appears as a rebus, a type of riddle in which words and phrases are spelled out in the form of the object whose name they represent. Fell says that this represents the Hand of God (Dextera Dei, in Latin). He translates it, "Father, Son, Holy Spirit, One God." The Ogam letter "L" is found at the end of this and other inscriptions, which Fell reads "ele," meaning "prayer."The decipherment of the Wyoming County and Horse Creek Petroglyphs represents a new concept of West Virginia's ancient history. It indicates that people from various cultures were here, and the clues that they left behind will continue to undergo intense study
Ida Jane Gallagher, a Beckley native, is a freelance writer who has been researching and writing about ancient American history since 1977. She does much of the field exploration and photography for her research topics.Gallagher earned Bachelor of Science and Master of Arts degrees from West Virginia University. She has worked as a journalist and as a teacher of journalism, English and American history She lectures to historical societies and school groups. She is an active member of Early Sites Research Society (archaeological), New England Antiquities Research Association (historic research, field exploration), and The Epigraphic Society, an international organization that studies ancient scripts.
CWVA Home Page
Controversies Page
"Ogham" Introduction Page
Contact the Council
© 2003 CWVA West Virginia Archeologist: Hunter Lesser on cult archaeologyWest Virginia Archeologist: Oppenheimer and Wirtz look at Fell's methodologyWonderful West Virginia: Robert L. Pyle on pre-Columbian contactsWest Virginia Archeologist: Hunter Lesser looks for pseudoscience, and finds itWonderful West Virginia: Ida Jane Gallagher finds a "solstice alignment"West Virginia Archeologist: Roger Wise looks for that "solstice alignment" againWonderful West Virginia: Barry Fell deciphers Christian messagesA second opinion: A very different translation of Horse Creek West Virginia Archeologist: Janet Brashler looks for all possible explanations, and tests them
Posted by Jill at 6:43 AM No comments:

Ancient Giant Christmas Card in a Cave in the Hills

Here's a sight you just have to visit.

It explains that the Irish were here in 600AD. They left the Christmas story on a wall in West Virginia. It's like an Indiana Jones story!
Posted by Jill at 6:35 AM No comments: 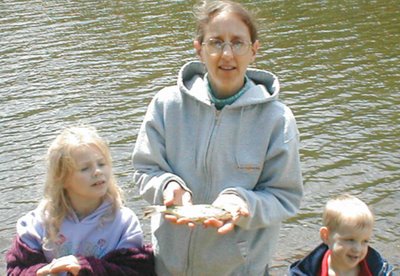 This is the big one that almost got away. We took the youth group fishing over the weekend. I think this bass is the largest fish I've ever caught.
Posted by Jill at 7:17 AM No comments: 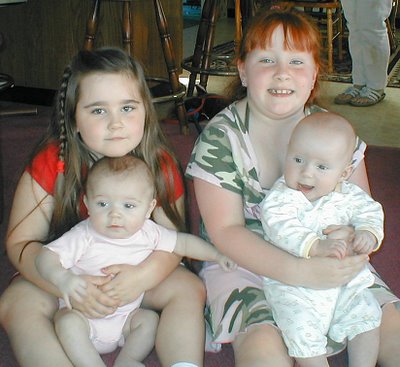 Here's the big sisters Haylie and Sarah with their respective little brother and sister Brandon and Rachel (little brother's boy clothes were in the wash). Aren't they look-a-like's?
Posted by Jill at 6:36 AM No comments: 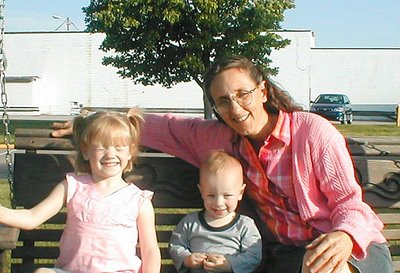 Though I'd just write a little about what we've been up to.
Tuesday we sang and played at a community jam session in the hometown of the famous Jessica Lynch. Everyone sat in a circle and played together, taking turns passing the mike around. Josiah was too busy talking to his friend to sit the whole time, so one lady rounded him up every time it was his turn. She didn't want to miss his singing. She said we livened the place up.

I've been reading some good parenting books. I guess it's not entirely too late to learn more about parenting. Josiah's only 13, even though he's taller than me now.
You should check out Hold on to Your Kids--Why Parents Need to Matter More Than Peers, and How to Talk So Kids Will Listen and Listen So Kids Will Talk. I also read a historical fiction Weedflower about a Japanese girl who was forced to live on an Indian Reservation after the bombing of Pearl Harbor, written by the daughter of a man who actually lived through the experience.

I've been practicing the violin. But Josiah keeps packing it away for some reason. 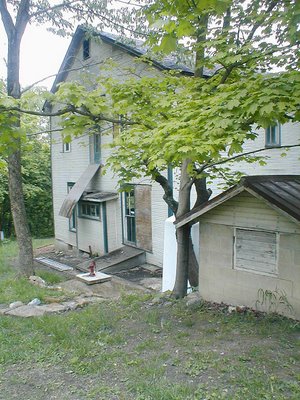 We visited a hotel restoration project in progress on Mother's Day. It was very impressive. I wish I had taken a picture of the front--it is about 100 ft. long. When you stand in the upstairs hallway, you can see clear to the other end. The rooms are being remodeled to resemble Bible stories. It will have an indoor climbing wall and trampoline--to accommodate the owners' rambunctious children. It will serve as a ministry to troubled teens. 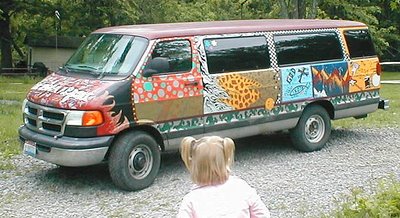 Kylie checks out the cool van. 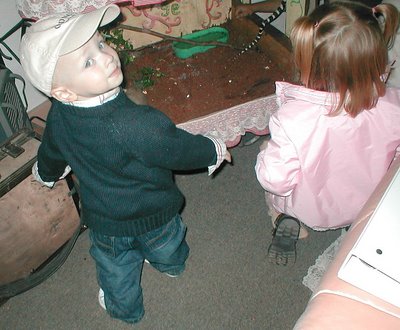 Luke and Kylie check out the snake's cage. 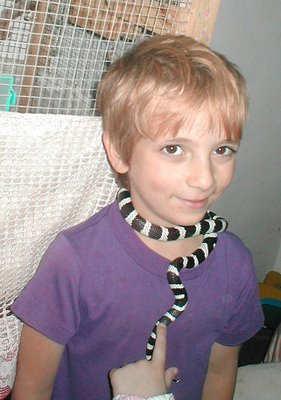 Here's Elisha with his pet snake.
Posted by Jill at 12:08 PM No comments: 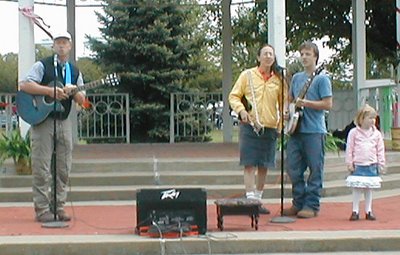 The Leggett Family appeared at a benefit concert in the park pavilion Saturday. Granddaughter Kylie played various accompanying instruments.
Posted by Jill at 6:49 AM 2 comments: